The prestigious cycling event Giro D’Italia is celebrating its 100th Anniversary this month! It kicked off on May 5th in Sardinia and cyclists from all over the world will take part in the three week event.

Giro D’Italia is of the three “Grand Tours” which include the ‘Tour de France’ and Spain’s ‘Vuelta’. It’s these three that professional cyclists regard as the best in the world.

All of these races are now made up of 21 different stages over three weeks with rest days in between.
Famous British cyclists Chris Froome and Sir Bradley Wiggins regularly compete as winning all three races is a coveted prize.

Not many people know this but the Giro doesn’t always start in Italy, although it typically ends in Milan, other Italian cities and smaller towns now tend to stage proceedings once the event gets underway, as they have the opportunity to mark important events and especially when a lucrative sponsorship is available
The race has started in Rome on two separate occasions – once in 1911 to commemorate the 50th anniversary of Italian unification and again in 2009 to celebrate the race’s 100th birthday, note this different to the 100th anniversary.

In total it has started outside Italy only12 times, in recent times it started in 2014 Belfast and in Apeldoorn in the Netherlands in 2016.
At the Giro D’Italia cycling event, the cyclists compete for the maglia rosa which is the famous pink jersey awarded to the overall leader. The cyclist who gets the best time over the mountains is awarded the Green jersey with young cyclists receiving their own prize.

The fact that a cycling even is celebrating it’s 100th Anniversary is truly remarkable. Over the years it has gone from strength to strength and really has stood the test of time. The route gives cyclists the opportunity to experience cities, towns, beautiful countryside and landscapes across different countries. It really is a unique and fantastic even which is not to be missed for any cyclist. Here is to the next 100 years of Giro D’Italia!

We use cookies on our website to give you the most relevant experience by remembering your preferences and repeat visits. By clicking “Accept All”, you consent to the use of ALL the cookies. However, you may visit "Cookie Settings" to provide a controlled consent.
Cookie SettingsAccept All
Manage consent

This website uses cookies to improve your experience while you navigate through the website. Out of these, the cookies that are categorized as necessary are stored on your browser as they are essential for the working of basic functionalities of the website. We also use third-party cookies that help us analyze and understand how you use this website. These cookies will be stored in your browser only with your consent. You also have the option to opt-out of these cookies. But opting out of some of these cookies may affect your browsing experience.
Necessary Always Enabled
Necessary cookies are absolutely essential for the website to function properly. These cookies ensure basic functionalities and security features of the website, anonymously.
Functional
Functional cookies help to perform certain functionalities like sharing the content of the website on social media platforms, collect feedbacks, and other third-party features.
Performance
Performance cookies are used to understand and analyze the key performance indexes of the website which helps in delivering a better user experience for the visitors.
Analytics
Analytical cookies are used to understand how visitors interact with the website. These cookies help provide information on metrics the number of visitors, bounce rate, traffic source, etc.
Advertisement
Advertisement cookies are used to provide visitors with relevant ads and marketing campaigns. These cookies track visitors across websites and collect information to provide customized ads.
Others
Other uncategorized cookies are those that are being analyzed and have not been classified into a category as yet.
SAVE & ACCEPT 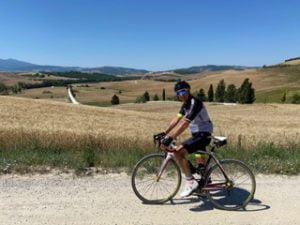 Want to be inspired to come to Tuscany?

Sign up to receive our newsletter on all
things cycling and Tuscan culture!

You have successfully subscribed to the newsletter

There was an error while trying to send your request. Please try again.